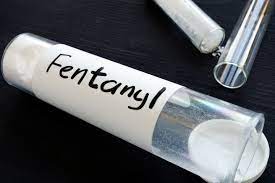 Fentanyl has been making headlines lately in the midst of an overdose crisis raging in America. Doubtless, if we don’t shut this down in the spirit, this overdose crisis will soon find its way into many other nations.

Fentanyl is a powerful synthetic opioid similar to morphine. Fentanyl, though, is 50 to 100 times more potent than morphine.  Fentanyl has long been a prescription drug, but nefarious drug dealers are manufacturing it illegally and using it to steal, kill and destroy lives. The trend is driving an alarming and increasing rate of overdoses. In fact, it’s the number one killer of Americans between the ages of 18 and 45.

According to the National Institutes of Drug Abuse illegal fentanyl is sold as a powder, dropped on blotter paper like small candies, in eye droppers or nasal sprays, or made into pills that look like real prescription opioids. Illegal fentanyl is being mixed with other drugs, such as cocaine, heroin, methamphetamine, and MDMA, the NIDA reports, which is especially dangerous because people are often unaware that fentanyl has been added.

“Illegal fentanyl and fentanyl-related substances are flooding into our market from our southern border in unprecedented amounts, with the bulk of this ultimately originating from a handful of manufacturers in Wuhan, China,” Louisiana Republican Sen. Bill Cassidy said. “Fentanyl accounted for 64 percent of the 100,000 overdose deaths last year— two out of every three people who died from opioids, it is from fentanyl or fentanyl-like drugs.”

Reports are pointing to China’s underground labs that are smuggling drugs laced with fentanyl to Mexico, which are reportedly being trafficked across the U.S.-Mexico border.

“Cartels will ship Chinese-made fentanyl into our country by mail, claiming the contents of the package is worth less than $800 which is the threshold for paying tariffs,” Cassidy said. “Because if it’s declared as less than $800, Customs and Border Protection does not inspect the package, and it passes through.”

Here’s what the Holy Spirit showed me: With most drug dealers, money is the motive. But the motive with fentanyl is beyond money. These drug dealers are purposely murdering their customers. Some believe China is purposely targeting American youth with the laced drugs.

Awakening Prayer Hubs is taking on the fight against fentanyl this month. We need to shut his down in the spirit so we can stem the tide of deaths in the natural. Join us for our monthly prayer call by registering here. Join the movement at www.awakeningprayerhubs.com.

Repent for indifference toward those amidst an opioid addiction.

Pray any corruption related to drug trafficking throughout the nations would be exposed (Mark 4:22).

Pray those selling drugs laced with fentanyl would be arrested and punished. Expose the lies planted by the enemy and the evil set in the hearts of men working with this drug (Proverbs 1:11-13: 2 Corinthians 4:6).

Shake up this business in every way possible Lord. Let salvation come to those who have been bringing this drug to market while there is still time for them to repent. (Revelation 9:21; Hebrews 12:25-27; 2 Corinthians 4:6).

Open the eyes of parents to this nefarious attack to murder their children and give teenagers and young people grace to resist the temptation to try drugs. Pray for all those in vulnerable areas Lord. Pray a hedge of protection and wisdom and help to not consent to enticement to taking drugs (Proverbs 1:10; 1:15; 1:20).

Pray for endurance, perseverance, and prevailing for those fighting addiction to win against the demon powers plaguing them. Pray that they would overcome as Jesus overcame the world (see John 16:33; 1 John 5:4).

Bind the spirit of murder and addiction coming against the young people fentanyl peddlers are targeting.

Pray those afflicted with addiction would encounter the heart of the Father (Galatians 3:26; 4:4-7).

Pray for mercy over the lives of those battling addiction that they would come to the knowledge of the truth (1 Timothy 2:4).

Pray for wisdom over the young people to make right decisions (James 1:5)

Pray those who are caught up in the patterns and cycle of substance abuse would seek help, spiritual and natural, to overcome addictions that may lead them to purchase drugs laced with deadly fentanyl (Psalm 121:1-2; Luke 1:37; 2 Timothy 1:7).

Pray that God would show the church how to help those recovering or struggling with addiction. Pray that the church would have witty inventions, new revelations, and new knowledge of understanding to help others (see Colossians 1:9-14).

Pray for deliverance ministries rooted in the word and sound doctrine to advance the gospel in schools, centers, and other places where patients need deliverance and counseling. Pray for more godly counselors to rise up and help support the needs in our communities for drug use and abuse training (see Acts 1:8).

Pray that God would break the power of opioids like Fentanyl in our communities and set the captives free.  Pray that God would deliver those in addiction and heal families destroyed by drug use and abuse (see Psalm 56:8, Isaiah 61:1-3).

Pray for waves of deliverance and healing from this drug as we stand in the gap and stand firm against this plan of the enemy to destroy this generation (Psalm 18:2; 2 Kings 18:33; Isaiah 43:13; Ezekiel 22:30).

Send out the evangelists Lord, the radical ones that have overcome this addiction calling them to repent and come into God’s end times army (Matthew 3:2).

Awakening Prayer Hubs is looking for 1,000 prayer warriors to raise up as prayer leaders—prophetic solutionists to problems in your city and nation. Start a hub or launch a hub. Find out more at www.awakeningprayerhubs.com.